Stand up for Floella 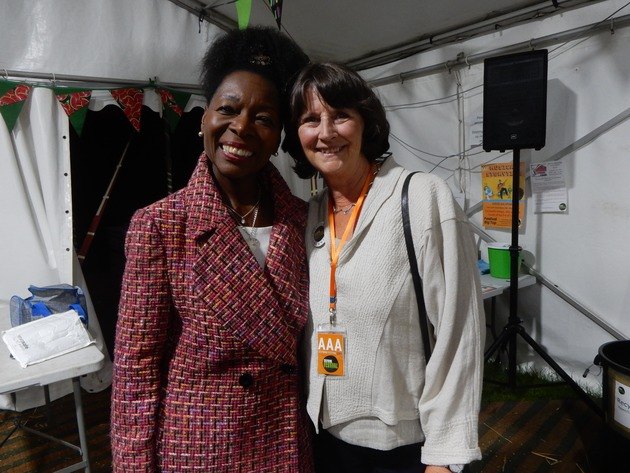 Baroness Benjamin of Beckenham – the title a tribute to her parents we were told – gave a bravura performance in the Big Top last night.


At the end, many in the audience gave her a standing ovation as she took us through her childhood in Trinidad, happy at first and then hard when her parents emigrated to England.


Afterwards, the queue to speak to her and receive one of her trademark hugs was long.  As I waited patiently to interview her I talked to her husband, Keith, her right-hand man in every sense and ever-present.


This was the tenth in the most recent series of talks, he said, and neither he, nor the audience, nor Floella, knew what to expect.  Every talk was different and every reaction.


Fresh from winning a gold at Chelsea for the Windrush Garden, marking 70 years since that generation began arriving on these shores to an uncertain welcome, Floella reflected at length on her own childhood and the lessons she learned.


She learned early that the colour of her skin marked her out and that many in England, a country she had thought was home, felt free to insult and assault her and those like her, simply based upon her ethnicity.


But she also learned that the prejudices she encountered could be countered by a strong mindset and a belief that the problem was not hers but theirs.  And so began a remarkable shift in attitude.


From the age of 14 her childhood, young adulthood, time as a children’s TV presenter, and onwards through the remarkable life she has lived so far, have been marked by resilience, independence and a fierce commitment to love.


‘Once you know what love is and you’re surrounded by love then everything else falls into place and nothing else matters,’ she told me when eventually we met.


Meanwhile, incidentally, I had witnessed the tears of many in the queue and the sight of a euphoric dancing circle including several leading lights of the Festival, including our own Chairman – and Floella.


She was made a baroness in 2010 and has been recognised for her work in support of the rights of children.


‘Making people understand the need to love children unconditionally and to make people realise they can turn lives around,’ is her life’s work and passion she says.


The full interview will soon be available on the Festival website.


Comments on our blogs are welcome on the website or by email to: media@steyningfestival.co.uk