The Green Revolution - a review

Ronnie Reed provides us with a review 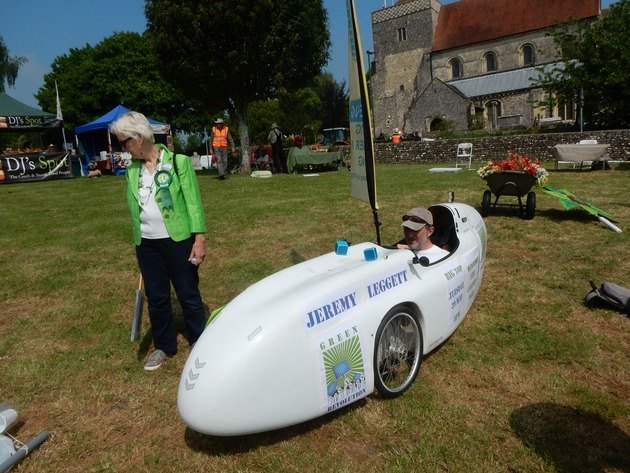 
For just a few moments the sound of rain on the canvas roof of the festival marquee filled the darkness around the audience and the speaker on the rostrum paused to check he could still be heard.  Then Jeremy Leggett, picked up his argument and continued.  Maybe, if you are in the business of waging war against those you believe threaten the future of our planet, a little rain is nothing.


Organised by Greening Steyning, Jeremy’s talk, ‘The Green Revolution; Winning the Carbon War’, offered his audience a respite from the doom and gloom that surrounds the depressing picture of the future of our plant in the face of climate change.  He delivered a positive, upbeat message based on his belief that we can win the battle against the vested interests of those who endorse our dependency on fossil fuels and achieve a long, prosperous, sustainable future for our children and beyond, based on clean renewable energy.


Jeremy has years of experience working in renewable energy.  His company, Solar Century was formed twenty years ago.  He has campaigned against the continued use of fossil fuels, won numerous awards for his contribution to promotion of clean energy and written a number of books including ‘The Energy of Nations’ and ‘The Winning of the Carbon War’.


In a detailed, persuasive presentation, Jeremy looked at whether the decarbonisation treaty signed by 195 countries at the Paris Climate Summit in 2015 is achievable or not.  For him economics is the key to determining the successful future of renewables and as the cost of energy like solar falls and fossil fuels, including shale oil and gas, become increasingly expensive, the future is looking more optimistic.  As new power in countries like China comes exclusively from wind and solar and big corporations like Alphabet (Google) embrace renewables, it seems there really is a green revolution taking place. Add developments like battery storage and electric cars into the mix and things are looking up.


Governments are also embracing the Paris agreement.  China has already met its 2020 climate goals, Scotland and Sweden are on target for 90% cuts in carbon by 2050.  Even Abu Dhabi has said that in fifty year’s time the last barrel of oil will be sold. Jeremy admitted that it was not all good. Only 20 % of world energy is renewable.  Trump is set on taking the US out of the Paris agreement, the oil and gas industries are entrenched in their out-dated business models. The retreat from oil and gas is still too slow.


But the evening ended on an upbeat note as Jeremy made a plea to those who support the use of fossil fuels, that growth models as they are, need to change.  The environment and social wellbeing of everyone needs to be taken into account and planning needs to take the long-term view so that we can have a sustainable, profitable, cooler, cleaner, resource friendly model to ensure our future.


And as the audience left the rain had stopped.


Comments on our blogs are welcome at media@steyningfestival.co.uk