The Revolution is under way

A celebration of the first day of Revolution! 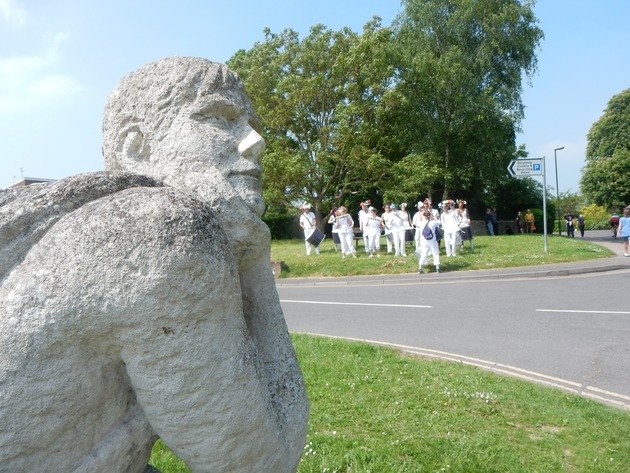 The first day of the Revolution is under way.  In fact, it’s almost over.  I wasn’t up in time to hear the Songs of the Dawn.  For me the day began early enough with morning prayer.  As it happens the Old Testament reading today was all about Joshua leading the Israelites on a march round the walls of Jericho.  They did their parading, they blew their trumpets, and when they let out their revolutionary cry, the walls came a-tumblin’ down – and someone wrote a song about it.  Not songs of the dawn but a song about a new day dawning.


But all I could think of was the walls of Bramber Castle which seem to have suffered a similar fate.  Imagine, I thought, what would happen if there was a Revolution here – in Steyning.  A revolt against the authorities, a downing of tools, a taking up or arms.  Time to have breakfast.


And then, when I should have been thinking about my sermon for tomorrow, I found myself distracted by thoughts of all the good things to come in the Festival.  I’m looking forward to Barry Cryer and Colin Sell tomorrow night.  My wife is about to go to out to hear Sarah Dunant tonight.


And I couldn’t wait to rush down to the Cuthman Field and see the parade assemble, colourful, joyous, noisy, tuneful.  Brilliant!  We did our own parading.  And, as it happens, I nearly did see a wall fall down, but that’s another story.  A bit of grumbling by car drivers but much cheering and waving by the crowds, captured – the crowds at least – by our broadcast partners, the BBC and put out this afternoon.


Back to the field after lunch for the Garden Revolution, and that seductive Big Top waiting to be filled with more than just the gently-rotating symbols of revolution.  The bar was busy, and the café.  Oh, I love the yarn bombs, exploding with colour and innovation.  And the gentle stroll home through some of the venues of the Art Trail to marvel at the creativity and talent.


And so it all begins.  In the sunshine.  A warm, basking type of sunshine.  Lovely.  Can this really be bank holiday weekend?


I didn’t see the Donald.  But take another look at the bonnet of the only vehicle we could find to ferry him at short notice.  What is it that sits upon it?  It can’t be can it?  It is.  Perhaps he was here.


All the expectations of the days ahead yet to be fulfilled.  If only someone had written a play about a Revolution in Steyning.  They have?  Yes.  Passport to Steyning it’s called.


I think we need a Revolutionary greeting.  A kind of code known only to real revolutionaries.


The first person says: Passport to Steyning.
The second replies: Stamped and sealed.


Go on, pass it on.  Spread the word.  Let’s spread the Revolution.  Let’s enjoy it while it lasts.

You can read the full programme here https://www.steyningfestival.co.uk/whats-on